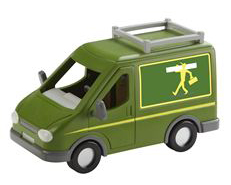 A little known fact, Mike Flood was actually made a reserve firefighter in the 2008 series.

This set was first released at the end of 2011.