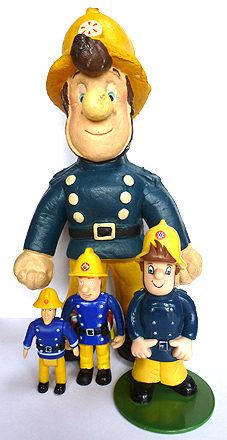 There aren’t that many old Fireman Sam toys and figures to collect. Plus you can easily pick up vintage items at affordable prices.

Use the dropdown menus above to find pages on each Fireman Sam toy manufacturer, from ERTL, Bendy Toys and Bandai through to Born to Play and Character Options.

Ertl released some of the earliest Fireman Sam toys. Even mint examples of the ERTL carded Wind Up Fireman Sam can still be found. Fireman Sam in the early days (late 80’s and early 90’s) had a slightly different styling. This is reflected in other toys of the era such as the Bandai figurine and Fireman Sam by Bendy Toys Ltd.

Toys of the modern era ‘new-styled’ Fireman Sam are easier to find. The chunkier, slightly larger scale figures and vehicle sets by former licensee Born to Play can still be found at retail. The CGI-inspired Fireman Sam toys by current licensee Character Options are widely available in all good toy shops and many supermarket chains too.

Fireman Sam is one of those evergreen properties with enduring popularity, so hopefully vintage Fireman Sam toys and figures will become ever more sought after and collectable in years to come.